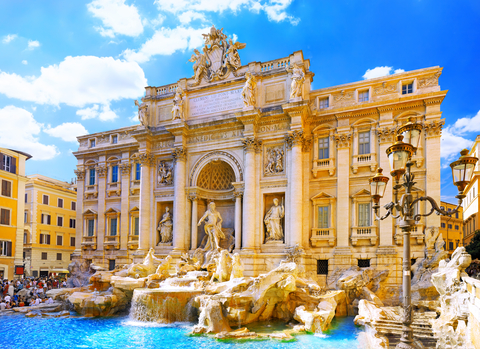 Rome was called the “Eternal City” by the ancient Romans because they believed that no matter what happened in the rest of the world, the city of Rome would always remain standing. Exploring the city centre by foot surrounded by glorious monuments and colossal remains takes you back in time to the “glory that was Rome”.

With its unparalleled history, Rome is the third most visited city in Europe and the fourteenth worldwide. It attracts visitors from all over the world who are impatient to discover the city’s impressive monuments and archaeological sites; not to mention its renowned cuisine and its lively atmosphere.

When exploring the Colosseum, visitors will easily imagine how the gladiators fought for their life in the arena, cheered by the crowd. In the Circus Maximus, travelers will picture the chariots crashing into each other in order to be first in the race, and in the Roman Forum visualise what the Roman public life was like.

How was Rome founded? How did it become an Empire? What was the role of the Catholic Church throughout Rome’s history? The exact origins of the city of Rome are still somewhat of a mystery. There are several theories all based on the writings of ancient authors and the archaeological discoveries. For this reason, the founding of Rome is based mainly on legend and myth. Instead of solid facts and figures. The existence of Roman Kingdom was even questioned during practically two centuries by expert historians. During the nineteenth and twentieth century, they dismissed the idea of the early kings of Rome (Romulus, Numa Pompilius, Tullus Hostilius) as well as the date of the founding of what would later become the capital of Italy, in 753 BC. This part of history was merely considered a legend and not taken seriously. It was only during the late twentieth century when, thanks to the findings of numerous archeological digs and other sciences, that the myths surrounding the establishment of the city and its first rulers were reconsidered. It is believed that the first inhabitants of Rome came from various parts of the region and had neither the economic nor the cultural development of their northern neighbours, the Estrucans, nor the southern civilization called the Sabines and Latins. In the Palatine Hill archeologists found the remains of a primitive settlement from the eight century BC, with burials on the outskirts of the village. It is thought that as the population grew, the inhabitants settled on the slopes of the nearby hills and during the next century they established themselves in the valley.