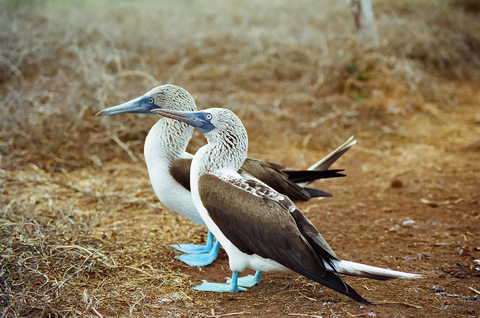 Galapagos Islands - one of the three top-ranked destinations in the world, according to Lonely Planet! Situated in the Pacific Ocean some 1,000 km from the South American continent, these 19 islands and the surrounding marine reserve have been called a unique "living museum and showcase of evolution". Located at the confluence of three ocean currents, the Galapagos are a 'melting pot' of marine species.

The Galapagos Islands are the result of volcanic activity that occurred approximately 5 million years ago. As these youjnd islands were cooling off some two million years later, certain species gradually began to arrive to the archipelago. It is speculated that these newcomers arrived in the Galapagos on large rafts of vegetation that broke off from the shores of Central and South Africa. Upon arriving in the archipelago, these species to evolve in an entirely new way, completely separate from their continental relatives.

Ongoing seismic and volcanic activity reflects the processes that formed the islands. These processes, together with the extreme isloation of the islands, let to the development of unusual animal life - such as the land iguana, the giant tortoise and the many types of finch - that inspired Charles Darwin's theory of evolution by natural selection following his visits in 1835. The Islands became a UNESCO World Heritage Site in 1978 and World Bioshere Reserve in 1985. The only populated islands are Santa Cruz, San Cristobel, Isabella and Floreana as well as the small island of Baltra on which the airport is located.

The first known person to set foot on the Galapagos Islands was Tomas de Berlanga, a Spanish bishop. His discovery of the Galapagos Islands we entirely accidental and occured in 1535 as he navigated towards the coast of Peru and Central America on an apostolic mission. His journey there experienced an unexpected detour when unusual winds and the Panama current pushed his ship towards the Galapagos, which were teeming with spectacular and eccentric creatures. "the birds are so silly", he wrote to Charles V (King of Spain), "they know not how to flee." Centuries later, in 1832 Ecuador took possesion of the archipelago and gave the islands their offical name.

The Galapagos are a lifetime experience, and all you need to do to "prepare" for them is simply brace yourself for the amazing. With highly unusual wildlife and otherworldly landscapes that aren't found anywhere else on Earth.

The Galapagos Islands are blessed with pleasant climatic conditions throughout every season, consequently there isn't any "best" moment to visit the precious islands. The best time may depend on what you hope to see and do. There are basicallty two distinct seasons which are hot and dry. Hot season (January through May) which has higher precipiation and warmer temperatures. Lush vegetation, bright sunshine with daily intermittent rainfall, vibrant colours and sultry heat. Dry season (June through November) sees very active marine life due to increased food supply, and comfortable weather conditions. The two transitional periods occur as seasons overlap. These are November through January and May through July.

On land, the best time to see wildlife is arguably during the hot season. Marine and land iguanas are at their most colourful, Galapagos giant tortoise eggs are beeing hatched at the breeding centres (on Santa Cruz and/or San Cristobal Islands). At sea, the dry season brings with it a significant increase in marine activity. Waters tend to be cooler but whether snorkelling or diving, wetsuits allow you more time underwater. Birds tend to enjoy this time of year too, as species like the American flamingo can be seen initiating elegant mating rituals.

Hiking is a must in the Galapagos. There is much to explore and no matter which island you visit, walking along the coast or up into the highlands puts you in the middle of everything. Birdwatching is impossible to avoid whether on land or sea. One thing to consider is that some of the Big 15 iconic species of the Galapagos can only be found on specific islands of the archipelago. Exploring the Galapagos on a cruise ship is an ideal way to reach some of the most remote spots.

Snorkeling offers you a view of life just beneath the surfast of the ocean. December, January and February are ideal for spending more time underwater and there is plenty to see. If you don't mind the slightly cooler temperatures, July and August are your window for viewing a frenzy of marine activity.

Other activities such as mountain biking, paddle boarding and kayakgin give you the chance to cover a lot of ground or coastline that might otherwise take you a little longer to explore. These activites can be enjoyed year round.

Bartolome Island - a rather small island teeming with fantastic landscapes and wildlife, Bartolome has one of the most postcard-worth views in the arhcipelago. Up at its viewpoint, visitors are awarded with panoramic views of the island's concave penninsula, Pinnacle Rock, and it's next door neighbour - Santiago Island. A wooden staircase allows guiests to gradually ascent to said viewpoint. This small island offers plenty of exciting activities. Wildlife highlights: As a young island, only pioener species have been able to thrive here, the most iconic of which is the Galapagos penguin. Visitor Sites: Bartolome Viewpoint, Bartolome Beach and Pinnacle Rock.

Chinese Hat (aka. Somrero chino) - less than a quarter of a square kilometre in size, the tiny island of Chinese Hat gets its name from its appearance. Here, visitors get to follow the trail around the cover, possibly catching a glimpse of American oyster catchers in action, along with marine iguanas, lava lizards and Sally Lightfoot crabs. Starting from a present-shaped and white sandy beach, this 400 metre long trail provides some wonderful landscapes to view. There is also good swimming amidst whitecap reef sharks and tropical fish.

Espanola Island - located in the southeastern corner of the archipelago, Espanola island offers visitors an amazing cliff-side landscape and an overwhelming diversity of wildlife. Wildlife hightlights: Galapagos albatrosses (this is the only island where you can spot them!), sea lions, lava lizards, Nazca boobies, blue-footed boobies, colourful marine iguanas, Darwin's finches and yellow warblers. Unique creatures: Home to the largest nextling colony of blue-footed boobies and the only island in Galapagos with a Waved Albatross colony (present from April to December), mockingbirds and lava lizard endemic to Espanol. Interesting geological formations such as the famous "blowhole." Visitor sites: Punta suarez and Gardner Bay.

Fernandina Island - the most western and youngest of all the islands. The massive large-shield volcano is the home of continuous volcanic activity via fumaroles and seismic processes. From time to time an eruption may be witnessed too. Most recent eruption took place in April 2009. Wildlife highlights: densest colonies of marine iguanas, sea lions, nestling colony of flightless cormorants and penguines, Galapagos snakes, intertidal pools. Unique feature: Fernandina Island may be rated as one of the most pristine islands in the world, due to the absence of introduced mammals. Amazing recent black lava flos with evidence of both "pahoehoe" and "aa" lava, give you astonishing views of only sea-going lizard while feeding upon algae. Intertidal pools bloom with marine life. Visitor site: Punta Espinoza.

Genovesa Island: The horsehoe-shaped island has a volcanic caldera whose collapsed, forming the Great Darwin Bay, surround by the cliffs. Although no hisotrial eruption are known from Genovesa, there are very young lava flows on the flanks of the volcano.